Bueller, Bulldogs & Beckham. A Look At 15 Of The Most Anticipated Super Bowl XLVI Commercials. 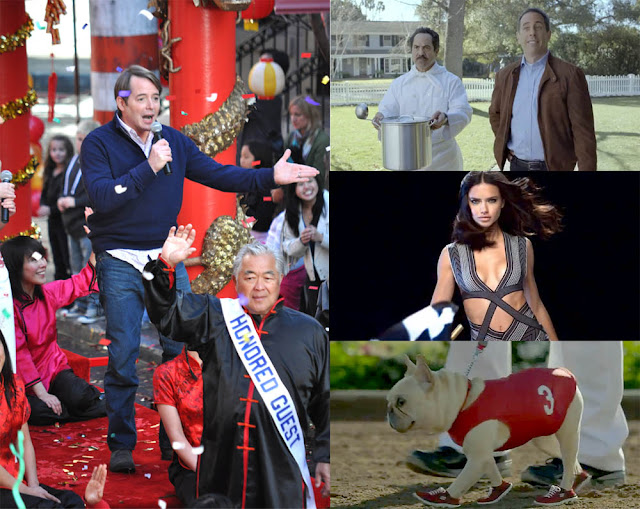 The practice of leaking Super Bowl spots before the actual Game Day is growing. And at about $3.5 million dollars a spot, it's no wonder big name brands are trying to get as much bang for their buck as possible.

For those who watch the Super Bowl more for the commercials than the actual sport, this may alleviate the need to tune into the game all together, a bad thing for network tv. For those who like to watch the spots multiple times, it's good for the companies.

Either way, here's a bunch of tv spots (and a few teasers) that will be airing on February 5th's 46th Super Bowl. References to 20+ year old movies and tv shows like Star Wars, Ferris Bueller's Day Off and Seinfeld seem to hint at the age of the creatives behind the ads.

Acura NSX "Transactions" with Jerry Seinfeld
Jerry Seinfeld is so excited about the new Acura NSX that he will stop at nothing to acquire the very first one. Check out the extended version of Acura's big game commercial:

Honda "Matthew's Day Off" extended version
Honda’s ad already sparked mass conversation thanks to last Thursday’s teaser. The commercial, directed by Todd Phillips (Old School, The Hangover, Due Date, etc.), features Matthew Broderick playing himself in a grown-up version of his celebrated role as Ferris Bueller alongside the all-new 2012 CR-V. Using themes from the original film to bring Honda’s “Leap List” campaign to life, the spot is meant to reinforce how the CR-V helps consumers conquer their aspirations before life’s next big phase.

True fans may also spot dozens of “Easter Eggs” hidden in the commercial that pay homage to the original film; fans are encouraged to join the conversation at Facebook.com/HondaCRV.

Volkswagon "The Bark Side"
A canine chorus barks a familiar tune. Keep an eye out for our 2012 Game Day commercial—it will all make sense. Love Star Wars and Volkswagen? You'll love this.


Chevy "Happy Grad"
Watch Zack Borst's winning entry to Chevrolet's Route66 competition. This Chevy ad will appear during Super Bowl XLVI. Filmed by Borst and company in four hours "Happy Grad" beat out 198 other video submissions and 400 scripts in the contest. Check out more about Chevy and Super Bowl XLVI at http://www.chevrolet.com/culture.

Audi "Vampire Party"
See the new Audi commercial and find out what happens when an Audi S7 shows up at a party full of vampires.

Toyota "Reinvented"
The brand's 60-second long spot is called “Reinvented” and continues the same theme as the first ads of the 2012 Camry last year, albeit with a more cheeky and humorous tone.
“Reinvention is a powerful idea and one we took to heart when we redesigned America’s most popular car with the launch of the 2012 Camry and elevated it above the competition,” said Bill Fay, group vice president of marketing at Toyota USA.

“The Super Bowl provides a forum to really drive home the reinvention message of the seventh-generation Camry, using humor to resonate with the American public," he added.
The “Reinvented” spot will be one of two 30-second commercials Toyota will be airing during the game on February 5.

KIA "Drive The Dream" Teaser
At last year's game, Kia took on the time traveling theme to show off its new Optima sedan. For this year's commercial, the South Korean automaker has chosen the topic of dreams to introduce the new 2012 Optima Limited edition.

Titled "Drive the Dream" and directed once again by Noam Murro who is helming the upcoming 300 spin-off, "300: Battle of Artemisia", the new 60-second commercial is set to air during the fourth quarter of Super Bowl XLVI.

“After working with Kia for the Super Bowl last year I was drawn to work with the fast-growing brand again by the idea of exploring people’s ultimate fantasies in a fun and lighthearted way, and I am certain we have created a spot people will be talking about after the game,” said Murro.

“Mötley Crüe had a blast doing the Kia commercial,” said the group's bassist Nikki Sixx. “A hot model, a fast car, a pro fighter, pyrotechnics and rock n' roll...What's not to love?”

Kia said that the the complete “Drive the Dream” ad will make its premiere on February 2 on more than 18,000 movie screens across the country. The company also released a teaser of the ad, which you can watch below.

Lexus Teaser
The Lexus Super Bowl 2012 Ad will promote the new 2013 Lexus GS 350. It is the first ever Super Bowl Ad for Lexus.

Bridgestone "Time to Perform" Teaser
"Bridgestone Americas was one of the first companies to begin offering highly produced and entertaining teasers ahead of our Super Bowl commercials when we began doing so four years ago," said Philip Dobbs, Chief Marketing Officer, Bridgestone Americas Tire Operations. "Now it has become standard practice for Super Bowl advertisers to produce really creative and suspenseful teasers. This year's sneak peak reveals how the Bridgestone brand plans to change the world of sports with its new line of tire technology-infused performance balls (and puck) that were introduced in the first "Press Conference‟ TV spot of the campaign.

Special thanks to SupercarHall for some of the additional info