Santa's On His Way! Find Him With The NORAD Santa Tracker. 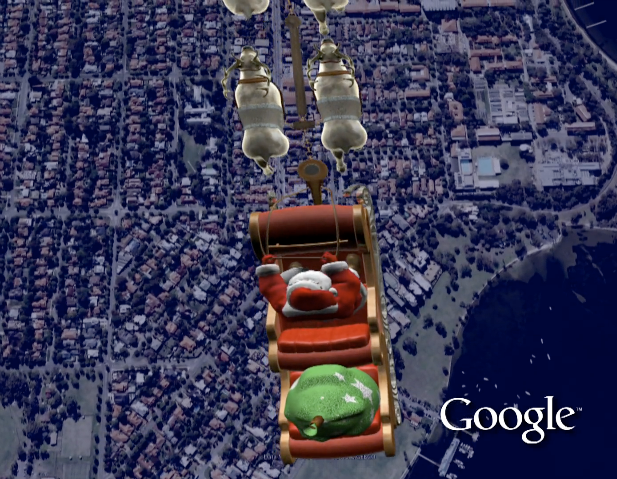 above: Santa as he cruised over Perth, Australia a few hours ago

If you have children, they are undoubtedly anxiously awaiting the arrival of Jolly Ol' Saint Nick this evening. Chances are, they are not snuggled in their beds with visions of Sugar Plums dancing in their heads. Heck, they don't even know what Sugar plums are.

It's more likely that they are using every excuse in the book to stay up late (I'm thirsty, I have to pee, I wanna see Santa....) and try to catch a glimpse of the bearded gift courier, you can assure them that He's on his way with the NORAD Santa Tracker. 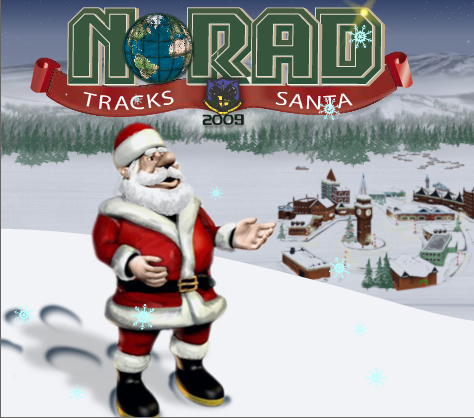 Regale them with wonderful updates and info, like how many gifts have been delivered, how many snacks Santa has consumed so far in real time and his latest stop. 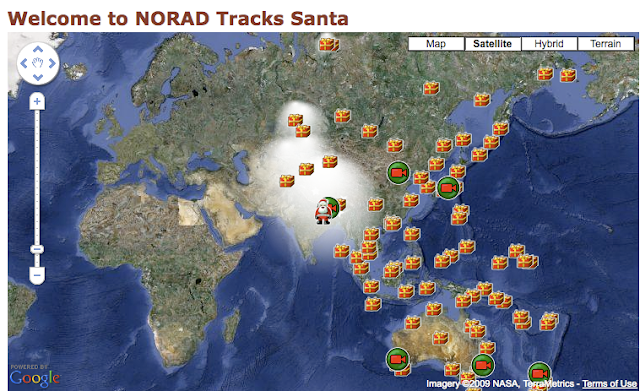 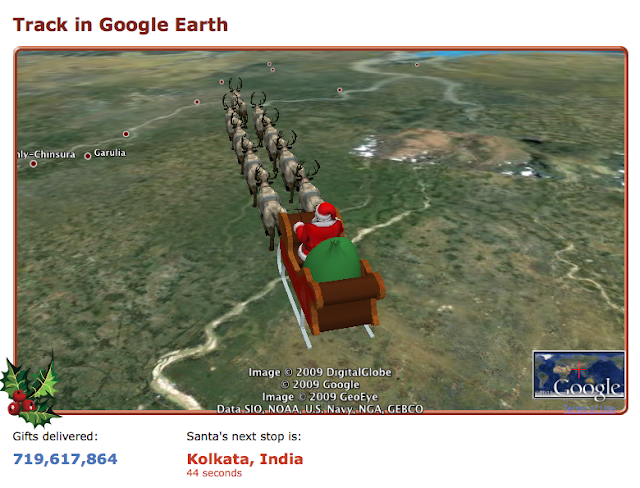 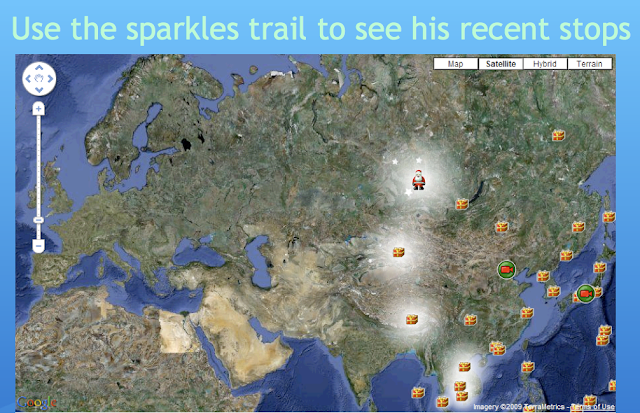 The moment that radar indicates Santa has lifted off, we use our second detection system. Satellites positioned in geo-synchronous orbit at 22,300 miles from the Earth’s surface are equipped with infrared sensors, which enable them to detect heat. Amazingly, Rudolph's bright red nose gives off an infrared signature, which allow our satellites to detect Rudolph and Santa. 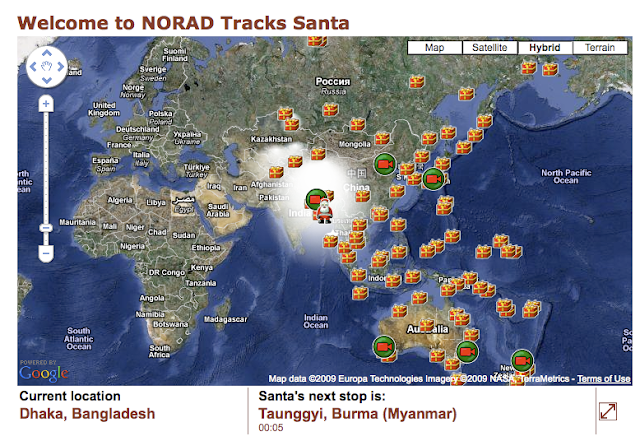 The third tracking system is the Santa Cam network. We began using it in 1998, which is the year we put our Santa Tracking program on the internet. Santa Cams are ultra-cool, high-tech, high-speed digital cameras that are pre-positioned at many locations around the world. NORAD only uses these cameras once a year on Christmas Eve. The cameras capture images and videos of Santa and his reindeer as they make their journey around the world. 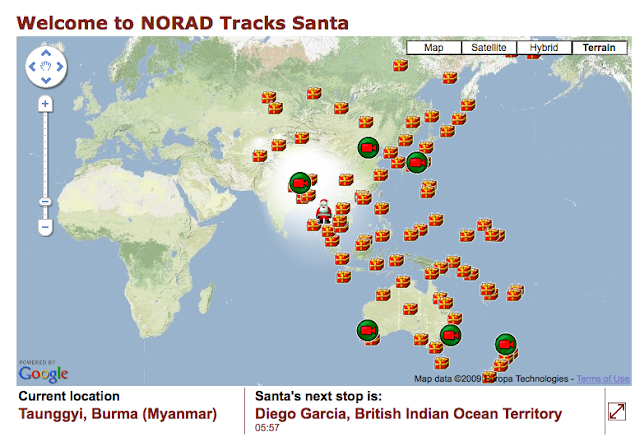 The fourth system is made up of fighter jets. Canadian NORAD fighter pilots flying the CF-18 intercept and welcome Santa to North America. In the United States, American NORAD fighter pilots in either the F-15 or the F-16 get the thrill of flying alongside Santa and his famous reindeer: Dasher, Dancer, Prancer, Vixen, Comet, Cupid, Donner, Blitzen and, of course, Rudolph.


You can see him via satellite, or map or terrain... zoom in on some Santa Cams, use Google earth to follow him and more. 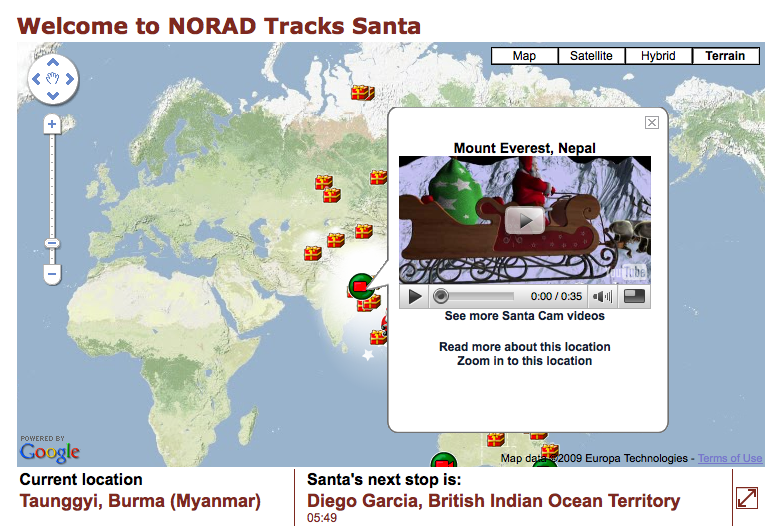 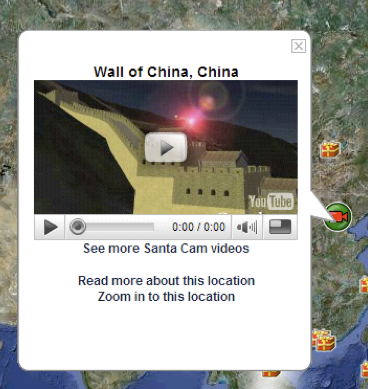 On YouTube you can track Santa's whereabouts on the NORAD channel in different languages. Kids can even check in and see what's happening in Santa's Village: 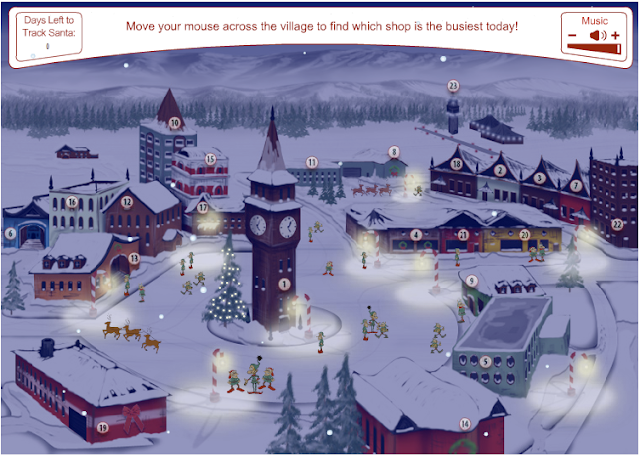 Although, not much to see now, since the bulk of the elves hard work has been done. You can even see how many snacks Santa has consumed so far in real time! 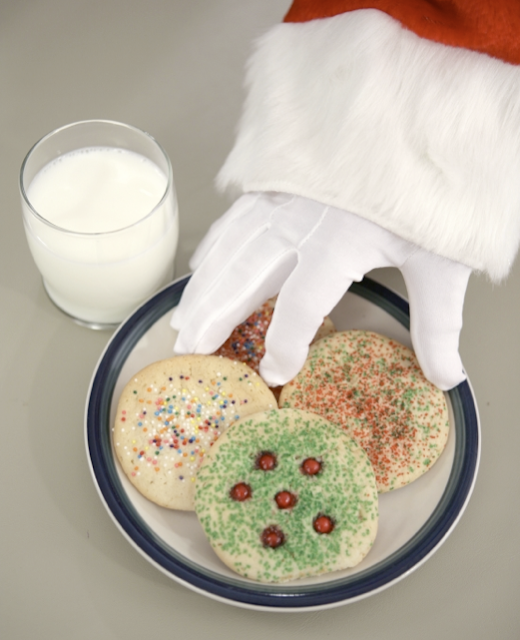 Santa takes breaks during his Christmas Eve trip around the world – especially for snacks left by children. Do you put a snack out for Santa? Kids all over the world do. Some even leave carrots for Santa's reindeer. (Carrots are their favorite food.) Check to see how many cookies Santa eats during his journey. No wonder he’s jolly and round! Leaving cookies for Santa is a tradition for many families. Imagine eating that many cookies in one night (burp)! How many cookies has Santa eaten so far at the time of this post?: 41143 Now see how many here!


HOT UPDATES from the North Pole: Mrs. Claus has informed NORAD that Santa’s “Naughty or Nice” list includes a record 1.9 billion children under the age of 15 this year. This list grows continually, as children are born at the rate of approximately 340,000 per day.

Check the world’s current population at http://www.census.gov/ipc/www/popclockworld.html Weather forecasters have predicted that the temperature at the North Pole on December 25 will be about -15 F (-26C). Brrrrrrr! Check current North Pole weather at http://www.weather.com/weather/local/99705?from=monthAvgGraph_topnav_undeclared

NORAD has received confirmation that the special navigation panel aboard Santa’s sleigh is functioning as planned. The elf staff provided no further comment or details. North Pole officials confirmed that the Santa Cams NORAD uses on Christmas Eve are in fact able to detect and photograph objects as large as 100 lollipops long and 55 lollipops wide. Elf Soen Firr, chief Santa suit engineer, confirmed that Santa’s red suit has been weatherproofed and tested to ensure Santa will stay warm and dry in any type of weather. No further details of the suit’s material or capabilities were released. Today, NORTH Pole staff have advised NORAD that it is the final day to send Santa an email because Santa and the elves will begin loading the sleigh later today. This is such a huge task that they will not have time to check emails! 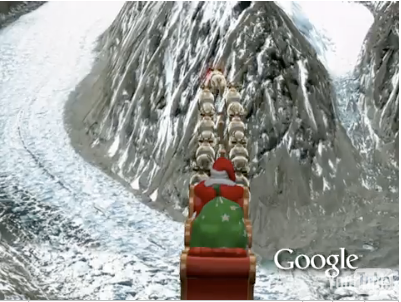 NORAD has confirmed that Santa and his fully-loaded, reindeer-powered sleigh took off from the North Pole and soared into the arctic sky at 6:00 a.m. EST (5:00 a.m. CST, 4:00 a.m. MST, 3:00 a.m. PST). NORAD radar is tracking Rudolph’s bright red nose, and satellite imagery is providing minute-by-minute coverage of Santa’s location.