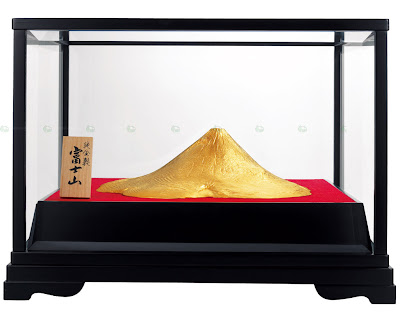 Made of 3 kg (6.6 lbs) of gold, the 6 cm (2.3 inch) high reproduction of Japan's sacred dormant volcano was made by jewelers Tanaka Kikinzoku of Ginza Tanaka and put on display on Tuesday, the day before it goes on sale in Tokyo. 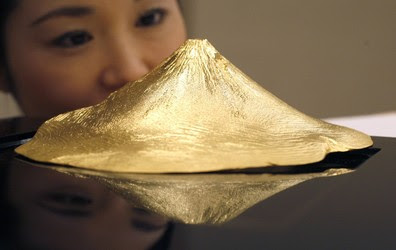 And despite the steep price tag, which comes as Japan's economy tries to stave off another slide into recession, the upmarket jeweler believes there will be buyers.

"We tried to make something that can be enjoyed as an art work as well as a valuable asset with this golden Mount Fuji. It is also a subject that has a special meaning to Japanese people," Naoto Mizuki, general manager of the Ginza-based company told Reuters. 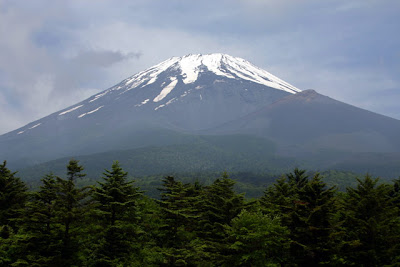 Mount Fuji (above) at 3,776 meters (12,388 ft) is Japan's highest mountain. It is believed to be sacred and is seen as a symbol of good luck, especially for the New Year period.

Mizuki said he believed the gold mountain would also hold a special appeal for investors looking to put their money into safe-haven commodities after plunges on the stock market and in real estate. 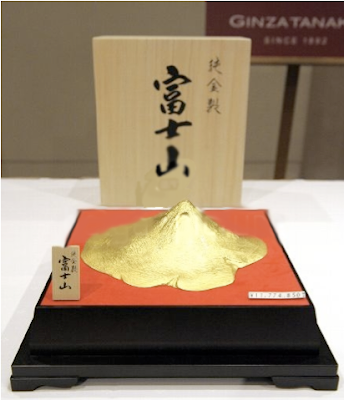 "The price of gold is rising dramatically, and the economic crisis forces capital to move from paper assets, which are losing their charm, to material assets," Mizuki said.

Mizuki said the design costs of the replica were kept down to about 15 percent of total costs -- a marginal amount compared to the usual 50 percent designers' fees -- to increase the product's investment appeal.

Tanaka Kikinzoku has two Mount Fuji's in stock and more will be made as orders are received. 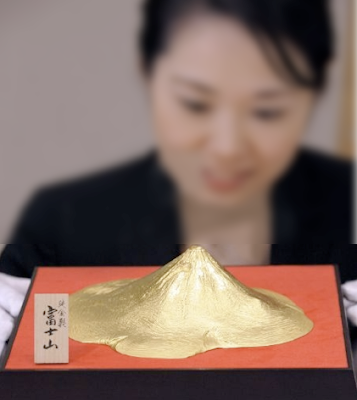 above: Ayako Kikuchi, a public relations officer of precious metals and jewelry shop Ginza Tanaka shows off the company's gold handiwork of Mount Fuji during its press preview in a Tokyo hotel on December 15, 2009.

Ginza Tanaka will sell the 22-centimetre wide and 6-centimetre-high 3-kilogram gold Mount Fuji model from December 16 this year with the price of 11.73 million yen ($132 000 USD) with the gold price currently at 3,400 yen per gram. AFP PHOTO / TOSHIFUMI KITAMURA 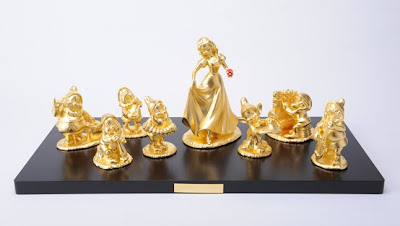 The pure gold “Snow White and the Seven Dwarfs” figurines took for 15 artisans, around 1.6 kg. pure gold and 6 months to sculpt this precious piece which already ranks as first of its kind in the World. Worth 30 million yen, it is not for sale, but is to be displayed in Ginza Tanaka headquarters and has been scheduled to travel to Nagoya, Sendai and Fukuoka branches of Tanaka until December 25 of this year.