Timed to coincide with the release of the highly-anticipated "Alice in Wonderland," starring Johnny Depp, The Times is the only major newspaper in the country to carry the innovative ad unit, conceived to launch the film in the most creative and unexpected manner to Southern California's key movie-going audiences and creative community. The cover-wrap art successfully coveys Depp's Mad Hatter visage as a 3D image in a 2D format and creates a powerful opening day impression. 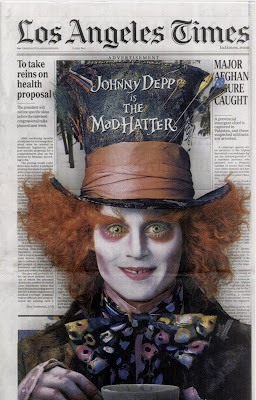 But not everyone thinks this was a good idea.

(Reuters) - The Los Angeles Times' critic may have panned the film, but that didn't stop Disney from paying top dollar to turn the newspaper's front page into a special advertisement on Friday for the new movie, "Alice in Wonderland."

The ad, believed to be the first of its kind among America's leading big-city dailies, dismayed some readers and was lamented by media scholars as the latest troubling sign of difficult times at the newspaper and for journalism generally.

The ad features a full-color photo of actor Johnny Depp in gaudy makeup, wig and costume as the film's Mad Hatter character, superimposed across an authentic-looking front page mock-up, topped by the Times' traditional masthead.

Depp's image -- emblazoned with the phrase, "Johnny Depp is the Mad Hatter" -- overlaps an old weather photo and two columns of reprinted stories about healthcare and Afghanistan, minus bylines and other names. The word "Advertisement" appears in smaller type just below the masthead.

To get to Friday's real news, readers had to open the so-called cover wrap, which was folded around the Times' entire A section as a two-page, front-to-back promotional spread.

A Times spokesman, John Conroy, declined to discuss the cost of the ad, but said, "The Times' front section is our most valuable real estate, so the ad unit was priced accordingly."

Hollywood blogger Sharon Waxman cited one "media buyer insider" as saying the Walt Disney Co, the studio behind the film, paid $700,000 for the space.

"That's a low price to sell your soul," said Roy Peter Clark, senior scholar at the Poynter Institute for Media Studies, who expressed sympathy for the paper and discomfort at the blurring of commercial and editorial interests.

"I want the Los Angeles Times to make a lot of money, and I want them to do use that money to do some of the best journalism they've ever done," he said. "But I think that this strategy is deceptive, and that my old school ulcer is starting to burn a little a bit."

Others were more blunt.

"It's a sad day in the history of a great newspaper, and my impression is they have received a lot of calls from people who are incensed by it, loyal readers," said Bryce Nelson, a former Times correspondent who teaches journalism at the University of Southern California.

Conroy disputed the notion that the ad undermines the paper's editorial integrity.

"We made it clear that this was a depiction of the front page, rather than a real front page of the newspaper," he said. "We had an unusual opportunity here to stretch the traditional boundaries and deliver an innovative ad unit that was designed to create buzz."

But Nelson said the ad would prove a turnoff to many subscribers, some of whom he knows had called him to protest.

"What this demonstrates is the newspaper's seeming willingness to put revenues over news coverage," he said.

Conroy said the editorial staff was informed in advance of the Depp ad, but he did not know if it elicited the kind of grumbling that occurred when the paper ran a cover-wrap in June promoting the new HBO television series "True Blood." That wrap was not presented as a faux front page.

The Times, which began selling display ads on its front page in 2007, also raised eyebrows last year when it ran a front-page TV advertisement that resembled a news story.

The nationally circulated USA Today drew criticism for a pseudo edition of its newspaper distributed at an AIDS conference in Geneva as a promotion for a pharmaceutical company. The Wall Street Journal and other dailies have run partial wrap sleeves around the outsides of their papers.

Like many newspapers, the Times has been hit hard by declining circulation and shrinking ad revenues, forcing the paper to scale back coverage and lay off hundreds of employees in recent years. The paper's corporate parent, the Tribune Co, filed for Chapter 11 bankruptcy protection in December 2008.