It's not easy to find a hip cookie jar that isn't ridiculously kitschy. This is the only one I've ever seen other than the Bunny Rabbit Cookie Jar by Momoyo Torimitsu. And it's a beauty. The white ceramic "Mama Bear" was fashioned after sculptor Tom Otterness' original bronze version. 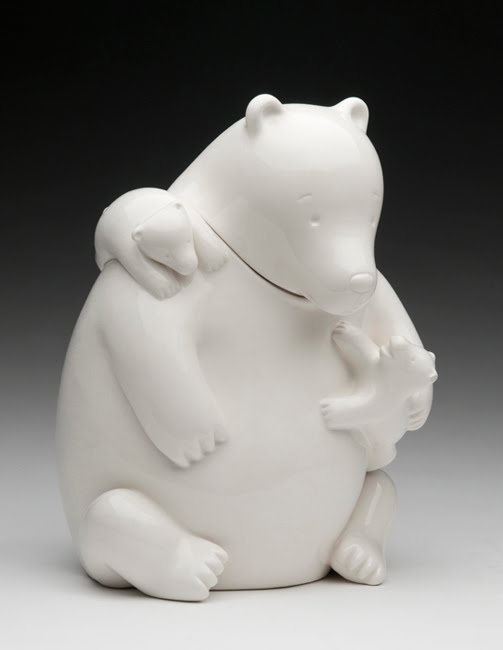 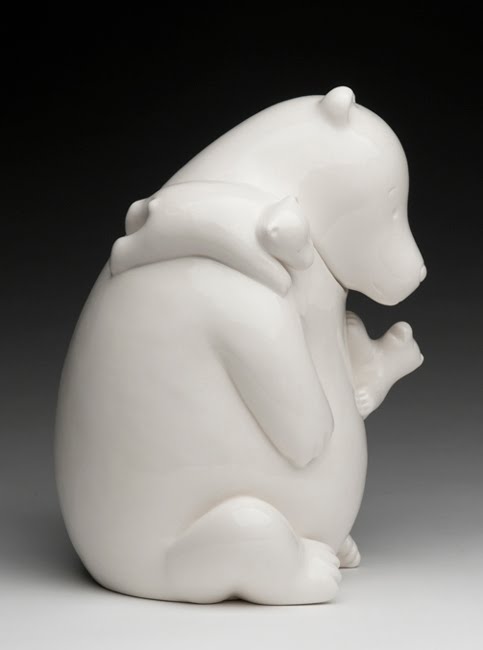 The beautifully designed ceramic cookie jar measures 12.5 in (31.75 cm) h x 9.5 in ( 24 cm) w x 9.5 in (24 cm) d. The exterior white glaze is contrasted with a cadmium yellow interior glaze that emits a magical warm honey like glow when the top is opened. It is an open edition with a decal signature on the neck and ships is a beautiful box designed by the artist. Retail price is $185. (click here to order) 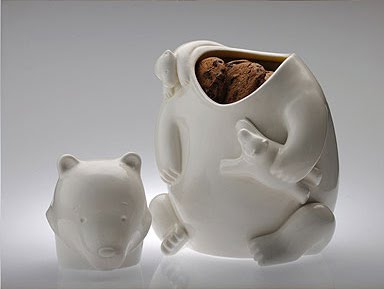 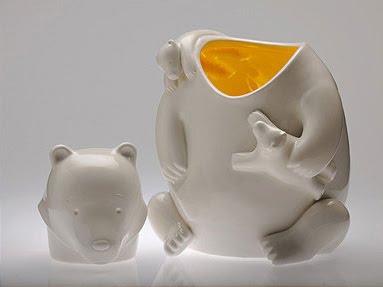 The edition was inspired by Otterness’ bronze “Mama Bear” [shown below] and shares the artists ability to attract the viewer to a wonderful inviting image while subtly introducing a mother’s concern for her children and their future in our environment. 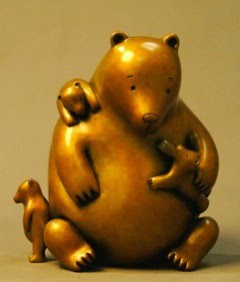 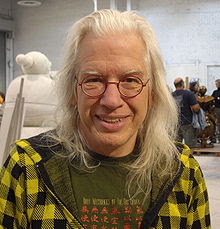 Artist Bio [courtesy of Cereal Art]:
Tom Otterness (b. 1952 in Witchita Kansas) is an American sculptor whose works adorn parks, plazas, subway stations, libraries, courthouses and museums in New York---most notably in Rockefeller Park in Battery City Park and in the 14th street/ 8th Avenue subway station---and other cities around the world. He was the first artist ever to have contributed a balloon to the Macy's Thanksgiving Day Parade. "...he made a giant Humpty Dumpty suspended in an upside-down tumble, as though he might have jumped from one of the swanky Central Park West rooftops..."

His style is often described as cartoonish and cheerful but tends to carry a political punch.His sculptures are filled with multiple meanings and allude to sex, class, money and race.These sculptures depict, among other things, huge pennies, pudgy characters in business suits with moneybag heads, helmeted workers holding giant tools, and an alligator crawling out from under a sewer cover. The main theme of his work seems to be the struggle of the little man against the capitalist machine in a difficult and strange city. His aesthetic can be seen as a riff on "capital realism" and blends high and low, cute and cutting.

In 2005, "Tom Otterness on Broadway", his largest exhibition to date, featured 25 different works installed between Columbus Circle and 168th Street in Washington Heights. The project was sponsored by the City of New York Parks and Recreation Department, the Broadway Mall Association, and Marlborough Gallery, and traveled to three other cities - Indianapolis, Beverly Hills, and Grand Rapids, Michigan. The Grand Rapids exhibition featured more than 40 works across two miles of the city's downtown area and at Frederik Meijer Gardens & Sculpture Park.

Known primarily as a public artist, Otterness has exhibited in popular exhibitions in locations across the United States and around the world, including New York City, Indianapolis, Beverley Hills, the Hague, Munich, Paris, Valencia and Venice. His studio is located in Brooklyn.