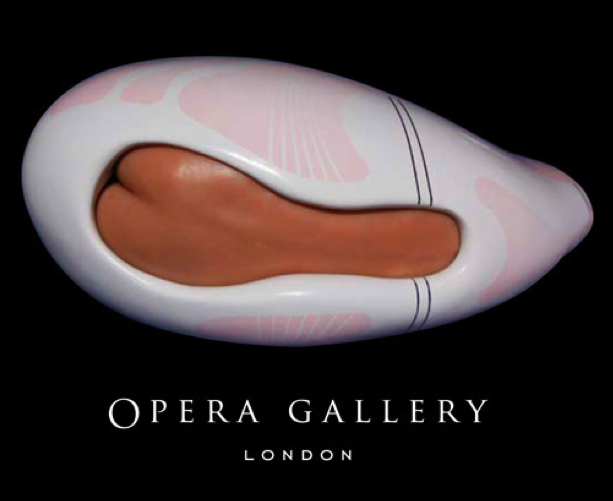 Artist Colin Christian, about whose Hello Kitty piece I mentioned in the 3 Apples show, had some wild new sculptures in the Inner Space Show at the Opera Gallery in London this past February.

With a large and growing cult following, the sculptor/painter, inspired by old sci-fi movies and pin up girls, has tapped into Invasion Of The Body Snatchers for some of his latest works; the Colin Capsules. 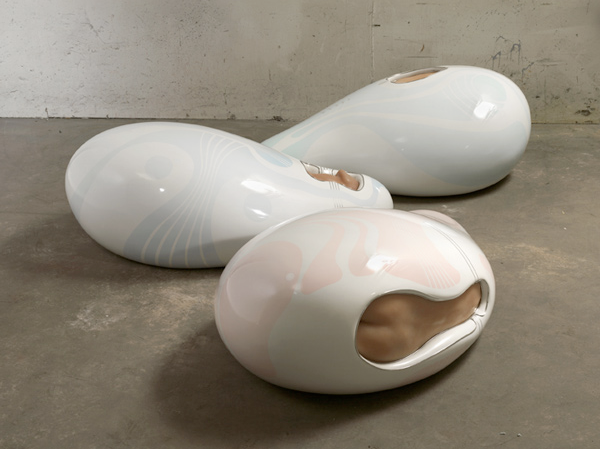 Three fiberglass and silicone cocoons, printed with colored graphics upon them, have the bodies of naked women encapsulated within them.

NOTE: The close-up photos of capsule #1 in this post, courtesy of Sven/ A million pieces , reveal R-rated imagery. Please use discretion when viewing and sharing. 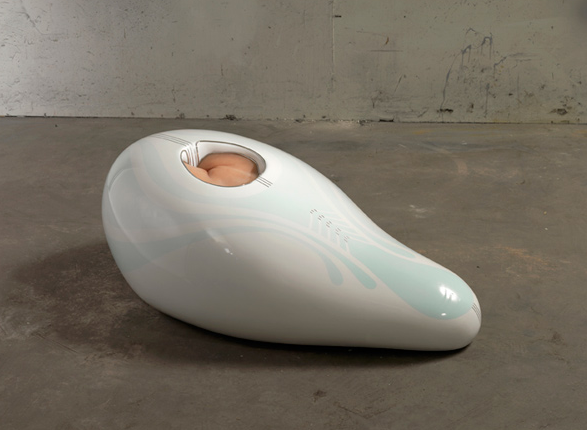 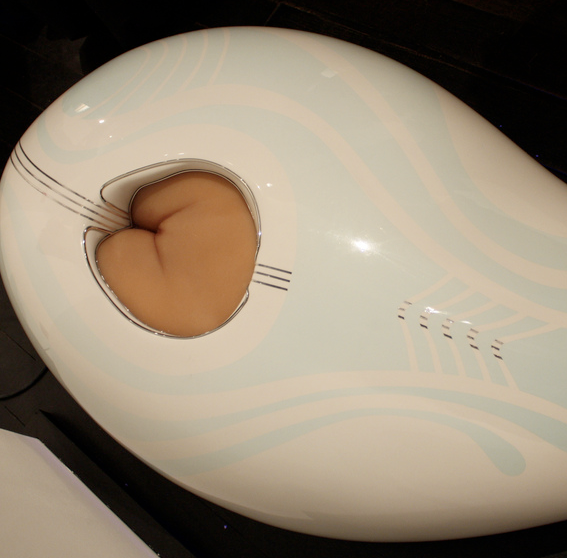 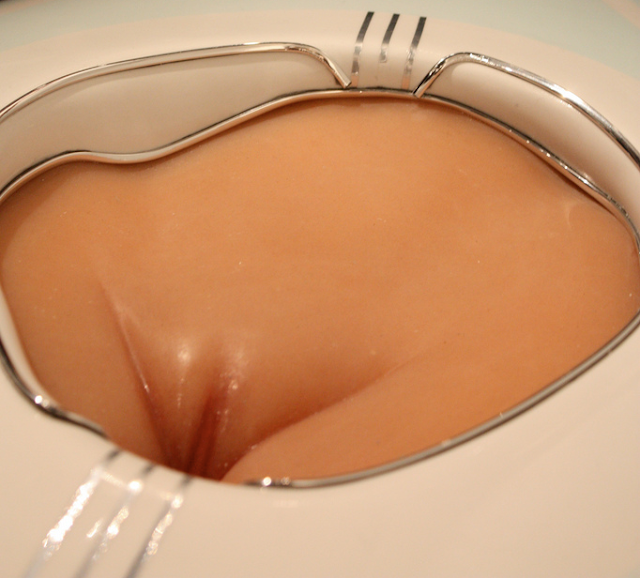 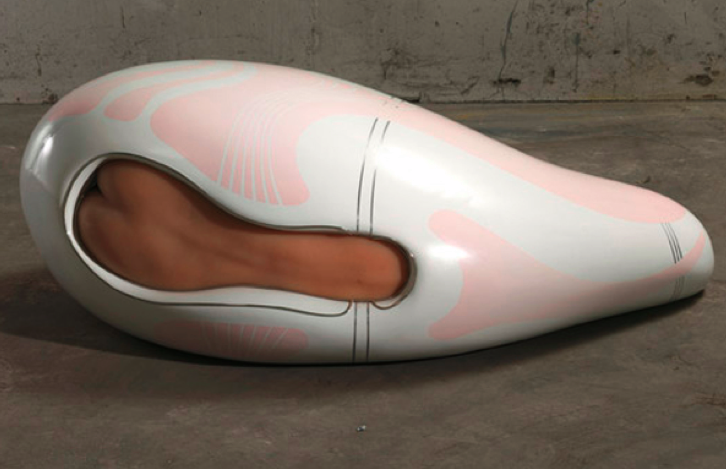 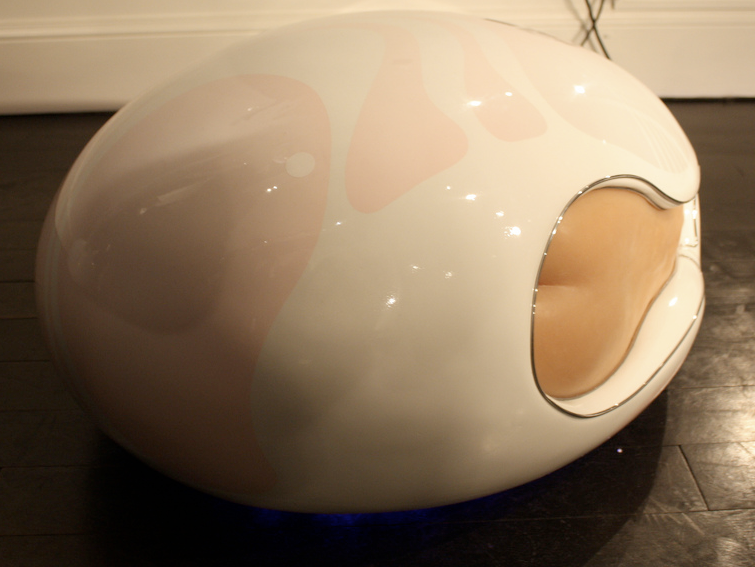 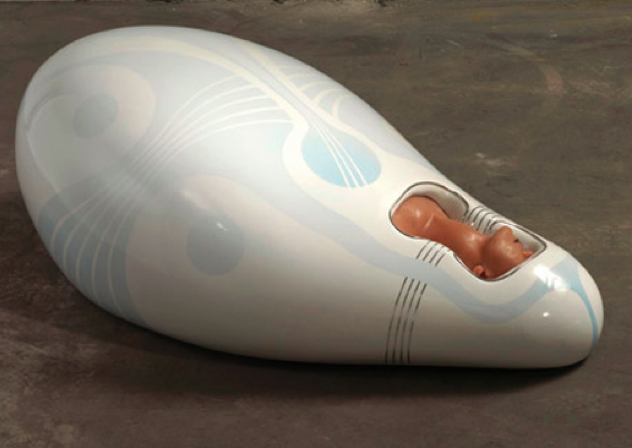 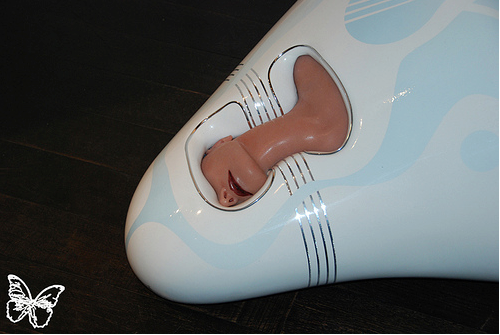 A few of the other pieces of his in the show: 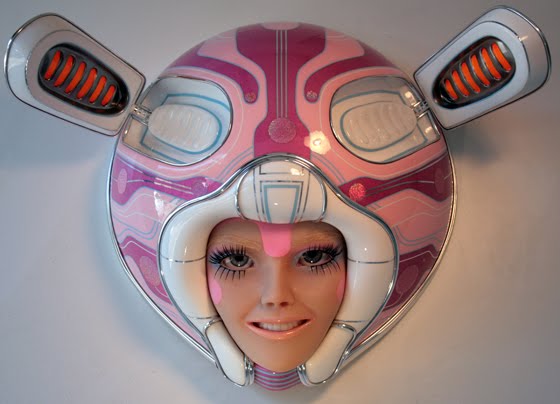 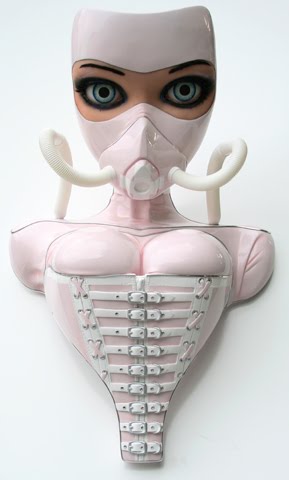 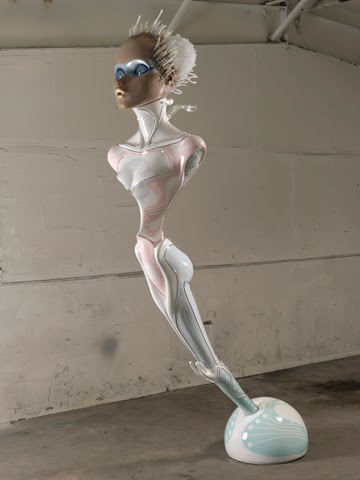 The blog, Arrested Motion, has a wonderful series of articles on Colin's work from the Opera Gallery show (as well as his wife's work) along with interviews and images.

By the way, I compared the paintings of his wife, SAS Christian to those of Margaret Keane's way back in 2007.

About the artist (bio taken from his own site): 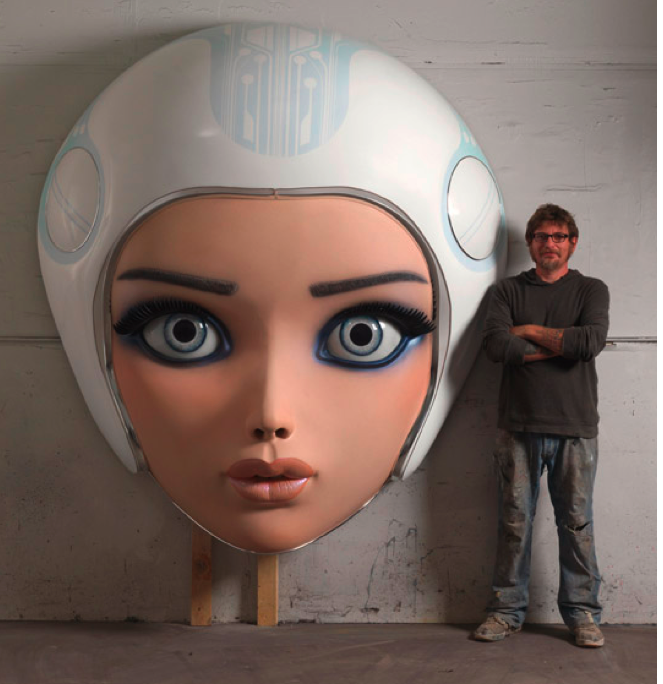 above: the artist with Gia'a, another piece in the show.

Born in London on March 30th 1964 to a loving and outgoing mother. He hated school and apart from art classes found the whole thing rather frustrating and useless. At the age of 15 he left school and lived for a year in Morocco with his mother, brother and sister. The cultural difference was very liberating. Upon his return to England at 16 he worked at a record music store and in 1982 became a DJ and was a stage manager for a large nightclub in the south of England. This is where he met his wife Sas in 1989.

In 1992 Colin moved to the U.S where he and his wife started a small business making latex clothing for fetish stores around the country. Their work was featured in Penthouse and Skin Two magazines. Taking what he had learned from the clothing manufacturing and combining it with his interest in movie special fx, Colin started to produce fiberglass figures and displays. In 1998 he produced his first production figure, an anime girl called "Suki" - a towering 7 feet tall and anatomically correct.

Colin decided to put his career on hold for a few years to take up commercial sculpture. Sas was developing as a painter and if this was to be encouraged she had to be able to devote herself full time, learning how to paint. The commercial work paid the bills for both of them and would support them both until Sas was ready to support herself. During this time Colin produced pieces for stores, museums and various businesses. A robot he made for the American Heart Association was interviewed by Katie Couric on the Today show and he also constructed the worlds largest mousetrap for pest control company Truly Nolen, which is now featured in the Guinness Book of World Records.

Colin now works full time on his original sculptures, finding inspiration in old sci-fi movies, pinup girl/supermodels, anime, ambient electronic music and H.P. Lovecraft. In 2004 he started using silicone in his sculptures, a difficult material to use but one that helps him achieve his goal of true cartoon realism, a line drawing made flesh. He is not looking to create every imperfection and flaw, but to take the exaggerations and perfections of cartoons and make them into a realistic 3D form.