Beautiful Creative Encourages You To Beautify Our Beaches For California's Coastal Cleanup Day. 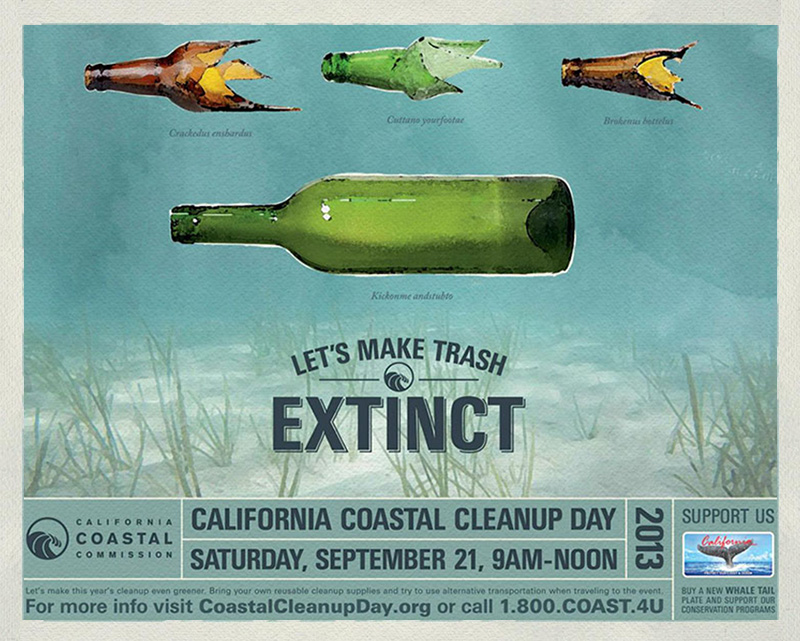 above: a cropped version of the full poster

WHAT IS COASTAL CLEANUP DAY?
Every year, on the third Saturday in September, people join together at sites all over California to take part in the State's largest volunteer event, California Coastal Cleanup Day. In 2012, over 65,000 volunteers removed almost 770,000 pounds of trash and recyclables from California's beaches, lakes, and waterways. 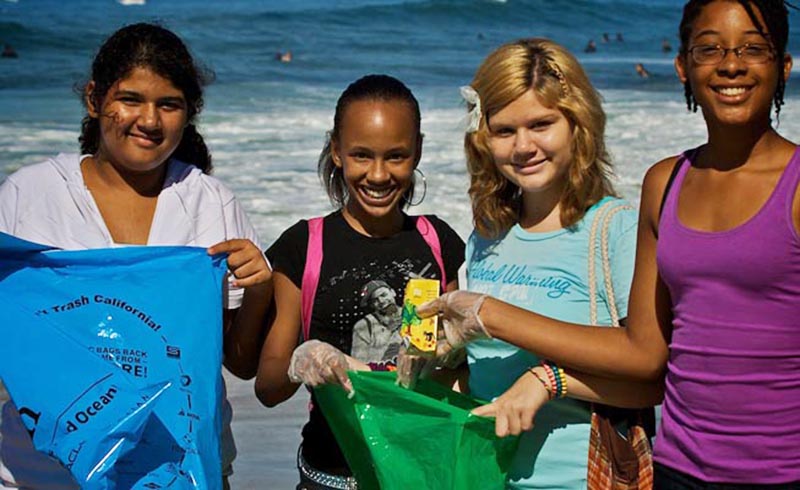 The event is part of the International Coastal Cleanup, organized by the Ocean Conservancy, which is the largest volunteer event on the planet.

The Creative Promotional Work
To promote this annual event, posters and digital work are created yearly, much of it wonderful. This year's campaign is no exception. Created by Art Director Greg Coffin and Copywriter Mike Brenner under Creative Director Ron Lim, the posters and other promotional pieces have turned trash into a 'species' whose extinction we need to bring about. 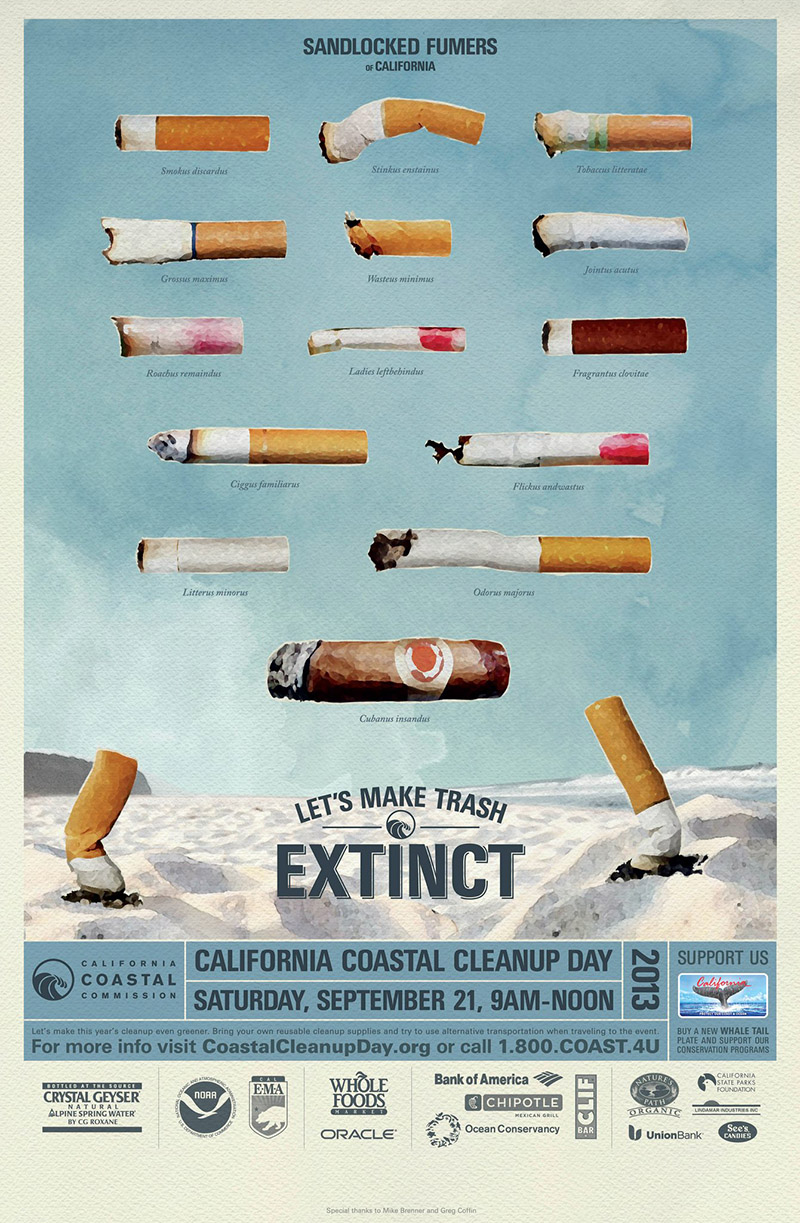 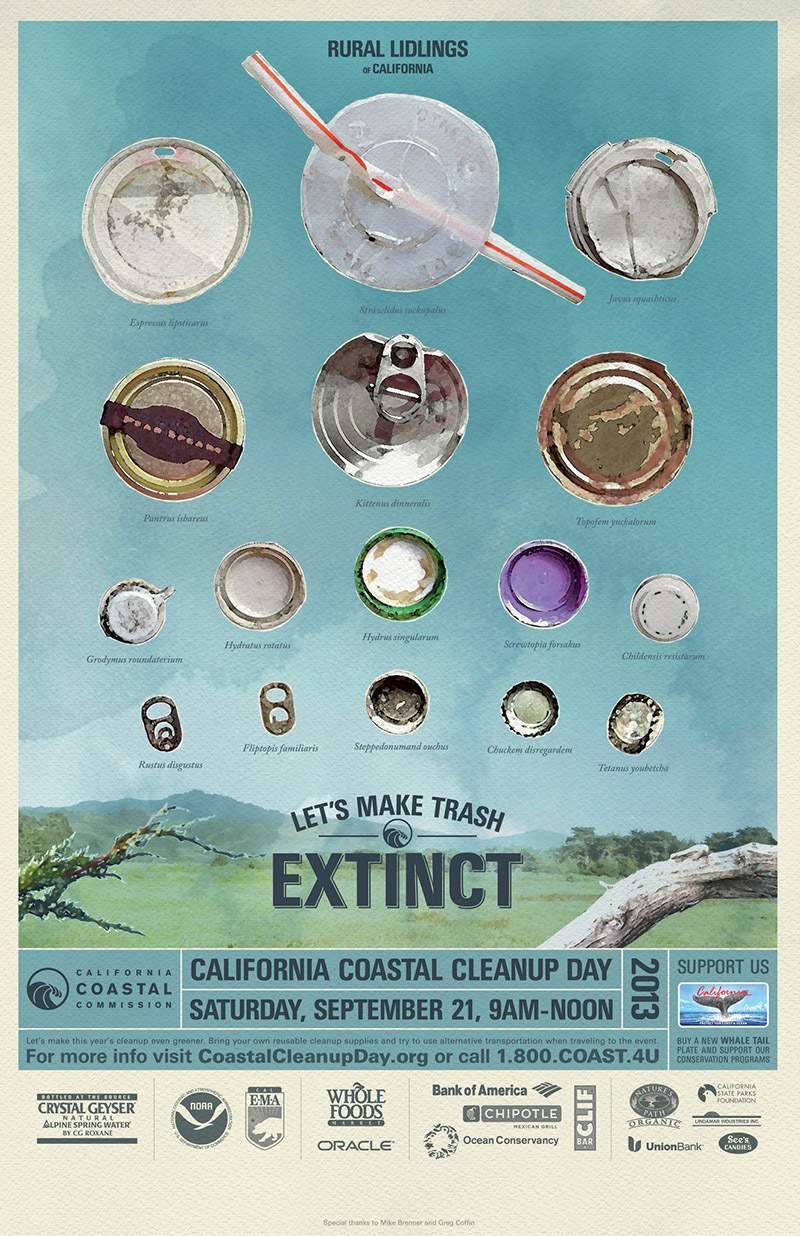 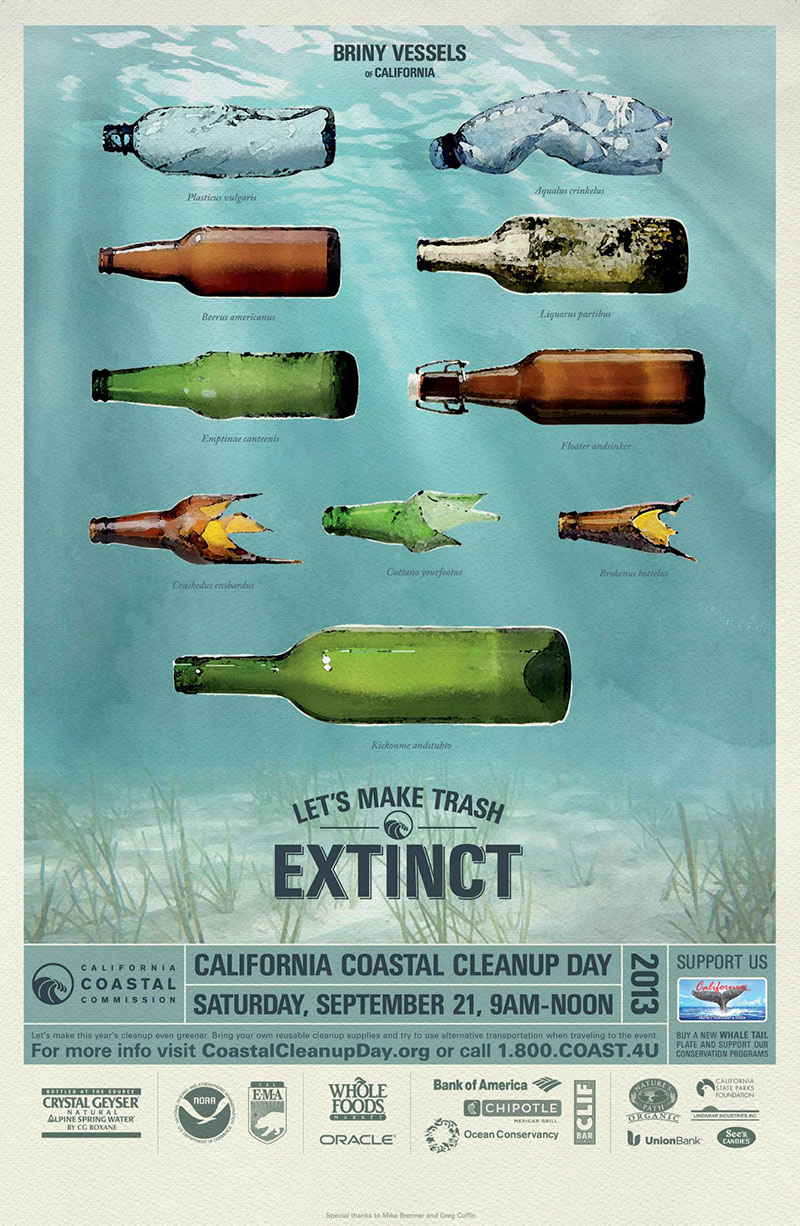 In addition to the above posters, they've created a daily digital social media campaign that is a 29 day countdown to the event. Each day an individual piece of trash encouraging you to be part of the solution appears along with the number of days left until the event on the California Coast's official Facebook page. One example is shown below and several more are scattered throughout this post.

above: The plastic bottle cap (Screwtopia forsakus) is a small top that unscrews from assorted beverages. If your city cannot recycle #5 plastic, it should be placed in the trash. Find out how to be part of the solution at www.coastalcleanupday.org

WHY ARE BEACH CLEANUPS IMPORTANT?
Vast amounts of plastic debris litter the world's oceans causing all manner of harm, and most of this debris comes from land. Our beaches are collecting spots for trash from city streets and highways. Trash travels - via inland waterways, storm drains, sewers, and on the wind, and eventually ends up on the coast. If not removed, this debris will end up in the ocean. Beach cleanups are a last line of defense - to prevent debris from causing harm to our oceans, to wildlife, to our coastal economies, and even to beach-goers.

above: The Aluminum Can Pull-Tab, Fliptopis familiaris, is a close relative of the Screwtopis familiaris. Both come from the tops of the family Briny Vessels and can be easily recycled when disposed of properly. Find out how to be part of the solution at www.coastalcleanupday.org

TRASHING CALIFORNIA'S BEACHES
Californian’s love their coast and ocean — nine out of ten will visit the beach at least once this year. When they arrive at the beach, they are finding a lot more than sand and surf. During a recent summer, Orange County collected enough garbage from six miles of beach to fill ten garbage trucks full of trash every week, at a cost to taxpayers of $350,000. Other California counties spend even more.

above: Javus squashticus, commonly known as the coffee cup lid, hot tea lid, or cappuccino cover is a species of rural lidlings that never really “go away.” They break apart and can leach toxins into food under changes in heat. Ask yourself if you really need that lid. Find out how to be part of the solution at www.coastalcleanupday.org

In 1975, the National Academy of Sciences estimated that ocean-based sources, such as cargo ships and cruise liners, dumped 14 billion pounds of garbage into the ocean. In 1988, the U.S. signed onto MARPOL Annex V, joining 64 other countries that signed the international protocol that regulates ocean dumping and made it illegal to dump plastic into the ocean. Laws like MARPOL have reduced the amount of trash on our beaches and in our ocean. Even so, plastic pollution is still a major problem. A recent study found an average of 334,271 pieces of plastic per square mile in the North Pacific Central Gyre, which serves as a natural eddy system to concentrate material.1 Results of more than 10 years of volunteer beach cleanup data indicate that 60 to 80 percent of beach debris comes from land-based sources. And debris in the marine environment means hazards for animals and humans. Plastic marine debris affects at least 267 species worldwide, including 86 percent of all sea turtle species, 44 percent of all sea bird species, and 43 percent of marine mammal species.2
1 Moore, C. J., S. L. Moore, M. K. Leecaster, and S. B. Weisberg, 2001. A comparison of plastic and plankton in the North Pacific Central Gyre. In: Marine Pollution Bulletin 42, 1297-1300. 2 Laist, D. W., 1997. Impacts of marine debris: entanglement of marine life in marine debris including a comprehensive list of species with entanglement and ingestion records. In: Coe, J. M. and D. B. Rogers (Eds.), Marine Debris -- Sources, Impacts and Solutions. Springer-Verlag, New York, pp. 99-139

HOW MARINE DEBRIS HARMS WILDLIFE
Entanglement: Common items like fishing line, strapping bands and six-pack rings can hamper the mobility of marine animals. Once entangled, animals have trouble eating, breathing or swimming, all of which can have fatal results. Plastics take hundreds of years to breakdown and may continue to trap and kill animals year after year.

above: The 6-pack soda holder (Seagullus strangularum) is a species of plastic trash in the Plasticus tangularus family. Marine animals get tangled in them easily. Remember to cut them up before properly disposing of them. Or better yet, buy soda cans packaged in a cardboard box. Find out how to be part of the solution at www.coastalcleanupday.org

Ingestion: Birds, fish and mammals often mistake plastic for food. Some birds even feed it to their young. With plastic filling their stomachs, animals have a false feeling of being full, and may die of starvation. Sea turtles mistake plastic bags for jellyfish, one of their favorite foods. Even gray whales have been found dead with plastic bags and sheeting in their stomachs.

above: The plastic bag (Grocerus gatheramus), also referred to as a shopping bag, is the most commonly found member of the Plasticus tangularus family. They photodegrade, or break down into smaller pieces which eventually enter the food web when animals ingest them. Find out how to be part of the solution at www.coastalcleanupday.org

HOW MARINE DEBRIS HARMS PEOPLE:
Beachgoers can cut themselves on glass and metal left on the beach. Marine debris also endangers the safety and livelihood of fishermen and recreational boaters. Nets and monofilament fishing line can obstruct propellers and plastic sheeting and bags can block cooling intakes. Such damage is hazardous and costly in terms of repair and lost fishing time. In one Oregon port, a survey revealed that 58 percent of fishermen had experienced equipment damage due to marine debris. Their average repair cost was $2,725.

above: The broken bottle, Cuttano yourfootae, is the result of a mixture between the originating species Kickonme andstubto and a sharp rock. Glass bottles are readily recyclable but broken glass can harm both people and wildlife. Find out how to be part of the solution at www.coastalcleanupday.org 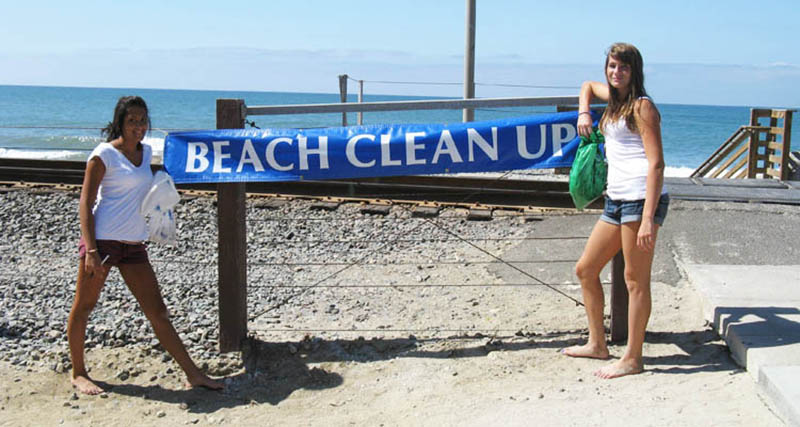 Find a Cleanup:
Cleanups take place along bays, creeks, rivers, highways, and the coast at more than 800 locations throughout California.  Use the map or list of California counties on this page to find your cleanup site and then contact the local coordinator.

If there is no cleanup scheduled in your area, you can volunteer to set one up, just call (800) COAST-4U or e-mail coast4u@coastal.ca.gov. 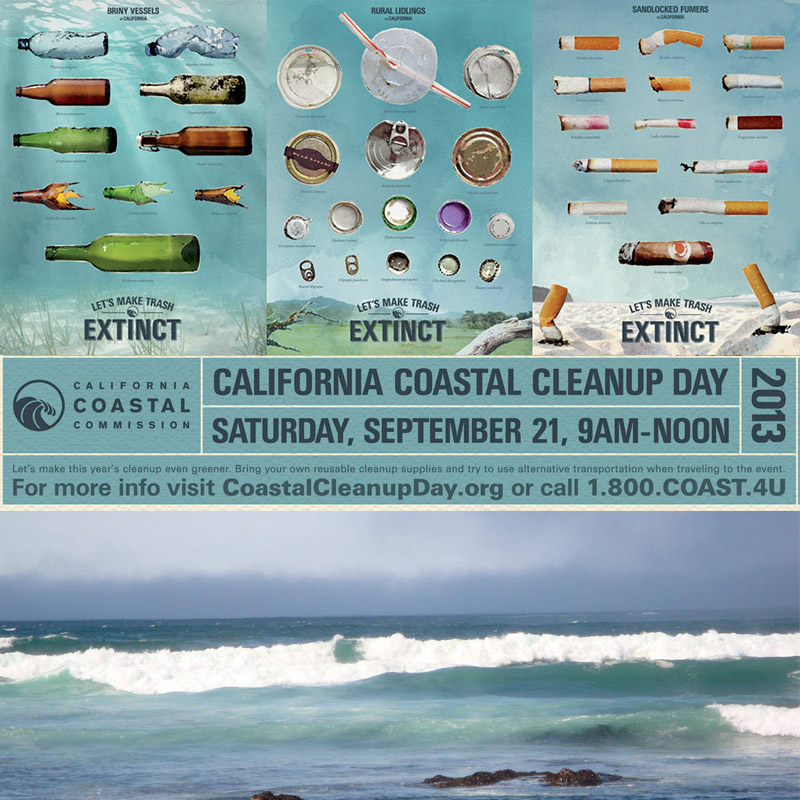 Register here to join the California Coastal Clean Up.