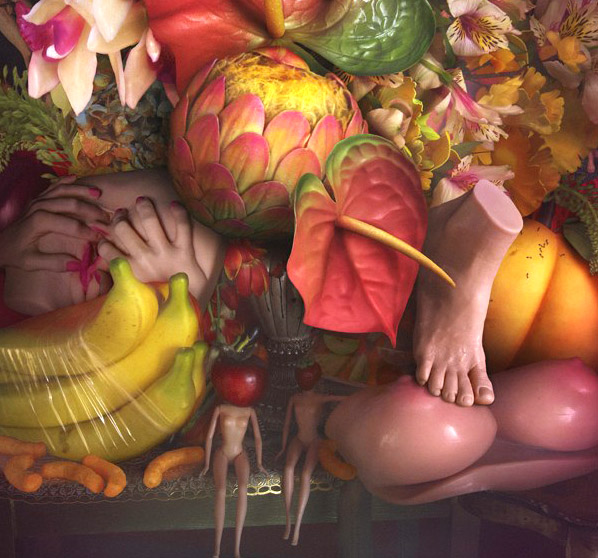 above: Lovers (detail) by David LaChapelle

In this new series of ten works photographer David LaChapelle, best known for his wild and elaborate fashion photography, he explores the vanity of life and beauty. With titles such as “Springtime”, “Late Summer”, “Early Fall” and “Deathless Winter” the works refer to the four seasons and allude to the life cycle: from birth to death. A contemporary take on the still life paintings of Flemish and Italian masters, these ornate florals contain references to present day culture and humanity, such as cigarette butts, Barbies, junk food, toys and telephones. 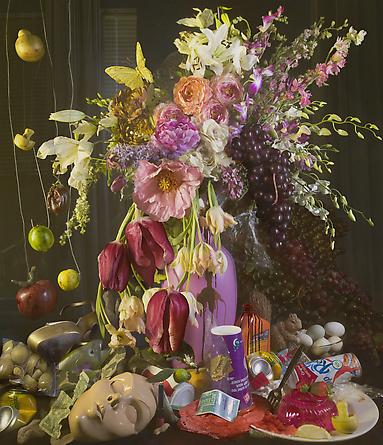 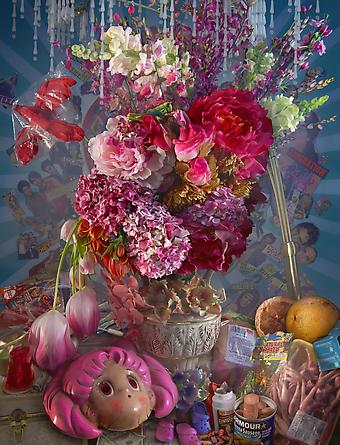 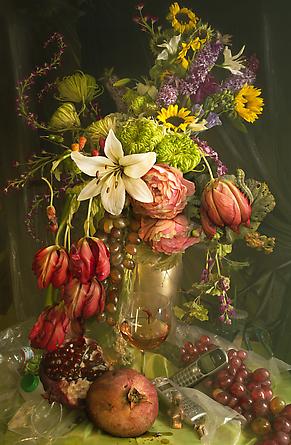 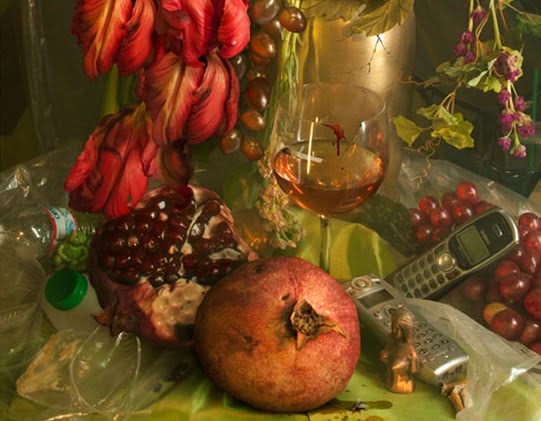 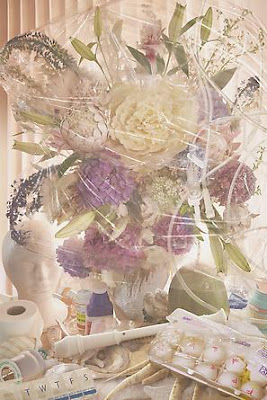 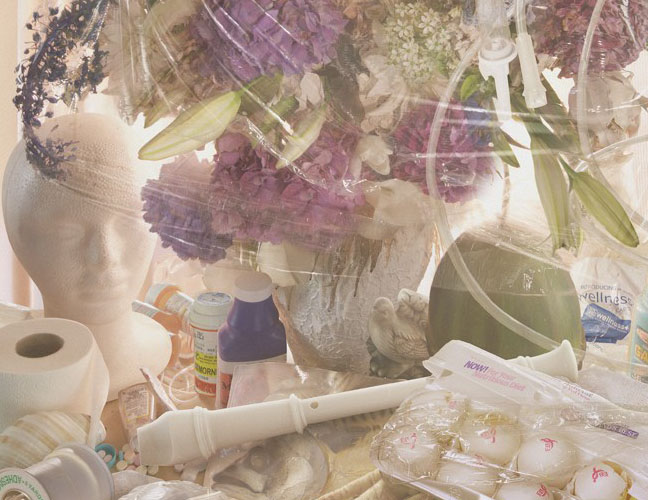 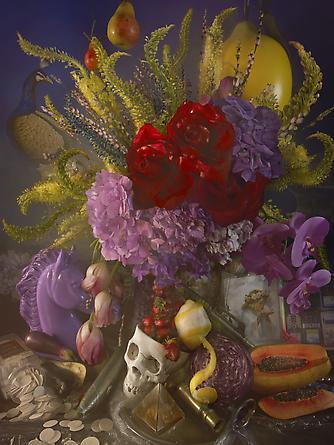 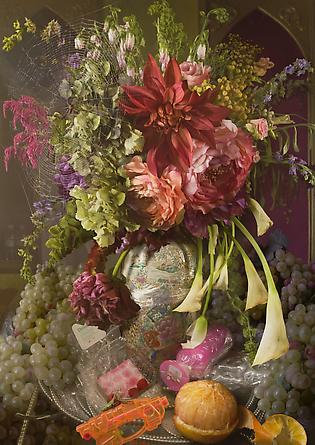 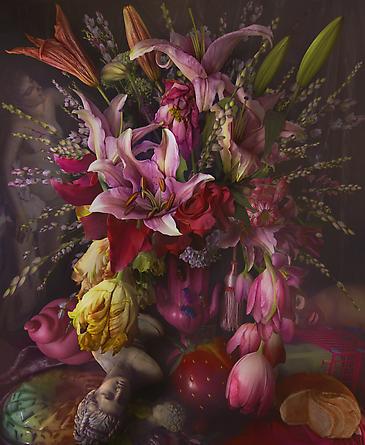 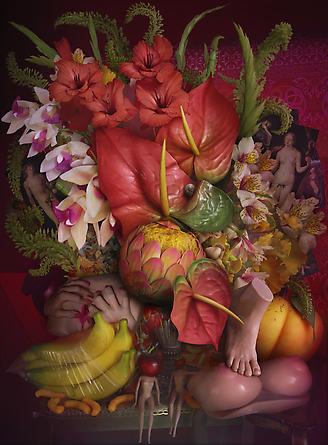 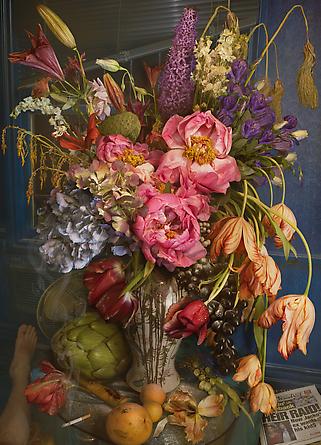 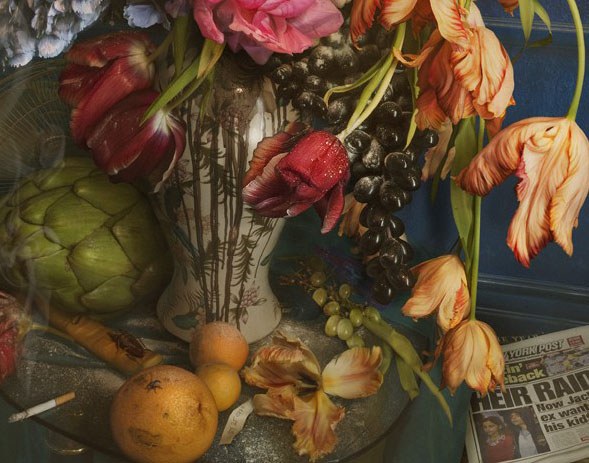 from the press release:
The title of the series is a quotation of the poem “Hamatreya” by Ralph Waldo Emerson, in which flowers are the earth’s laughter at the arrogance of human beings who believe they can rule the earth, although they themselves are transient and must return to it.

The title of the exhibition can also be read in the sense of the Baroque vanitas portrayals. The meaning of the Baroque floral still life was always related to the human hubris and transience of earthly existence, with the classical still life often containing many of the following: flowers, fruits, vegetables, animals, insects, mask, candles, watches or skulls. These symbols denote the fugacity and limitations of human life and the meaningless nature of vanity. Just like wilting flowers, albeit their beauty, we will all fade away.

Whilst LaChapelle shows an explicit compositional affinity to Baroque floral still life, he transfers the genre from painting to photography. The artist employs art historical visual traditions, but he also translates them into visual metaphor of and for our time. On second glance the viewer will discover objects of contemporary society in the blooming and fading flower arrangements: burning cigarettes, newspapers from yesterday, old mobile phones, plastic, Barbies, a Manga mask, medical devices, a burning American flag, a model of an airplane, balloons, tins, collages, throw away dinnerware or a tattered dollar bill. These are the metaphors of vanity in our era of an affluent though seemingly troubled society. The often bizarre and excessive symbolical imagery does not fail to remind us however, as in the traditional vanitas, to follow our virtues and to celebrate life before it‘s over.

‘Where are these men? Asleep beneath their grounds: And strangers, fond as they, their furrows plough. Earth laughs in flowers, to see her boastful boys Earth-proud, proud of the earth which is not theirs; Who steer the plough, but cannot steer their feet, Clear of the grave.’ -- Ralph Waldo Emerson (1803-1882), Hamatreya, 1846

The series of photographs by David LaChapelle, ‘Earth Laughs in Flowers’ was first shown at Hannover’s Kestnergesellschaft Museum in spring 2011. Since then the exhibit -in conjunction with ROBILANT + VOENA has been presented to the British, Italian and Swiss public, across its two galleries in London and Milan, as well as the Reformierte Dorfkirche, St. Moritz in collaboration with ST.MORITZ ART MASTERS. Now, In collaboration with Fred Torres, the show is now being exhibited in New York.