List Of Words Banished From The Queen's English For Mis-Use In 2011. 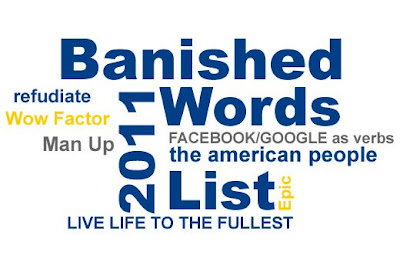 SAULT STE. MARIE, Mich. – It may have been word of the year in some wheelhouses, but "refudiate" wasn't looked upon favorably by many who sent in nominations for Lake Superior State University's 36th annual List of Words Banished from the Queen's English for Mis-use, Over-use and General Uselessness, which was released on New Year's Eve.

In a busy U.S. election year, "the American People" told LSSU they were tired of not only "refudiate," but also "mama grizzlies" who wanted their opponents to "man up."

But words and phrases related to technology and the way we communicate dominated the list for 2011, including "viral," "epic," "fail," and the use of websites "Facebook" and "Google" as verbs. "Viral" received the most nominations.

The "back story" on LSSU's popular list began on Jan. 1, 1976, when former LSSU Public Relations Director Bill Rabe and a group of friends each contributed a few expressions that they disliked to form the first list. After that, the nominations stacked up for future lists and Rabe's group, known then as The Unicorn Hunters, didn't have to make up its own list again. LSSU receives well over 1,000 nominations annually through its website.

VIRAL
"Often used to describe the spreading of items on the Internet i.e. 'The video went viral.' It is overused. I have no objection to this word's use as a way to differentiate a (viral) illness from bacterial." Jim Cance, Plainwell, Mich.

"This linguistic disease of a term must be quarantined." Kuahmel Allah, Los Angeles, Calif.

"Events, photographs, written pieces and even occasional videos that attracted a great deal of attention once were simply highly publicized, repeated in news broadcasts, and talked about for a few days. Now, it is no longer enough to give such offerings their 15 minutes of fame, but they must be declared to 'go viral.' As a result, any mindless stunt or vapid bit of writing is sent by its creators whirling around the Internet and, once whirled, its creators declare it (trumpets here) 'viral!' Enough already! If anything is to be declared worthy enough to 'go viral,' clearly it should be the LSSU Banished Words list for 2011!" Lawrence Mickel, Coventry, Conn.

"I knew it was time when the 2010 list of banished words appeared in Time magazine's, 'That Viral Thing' column." Dave Schaefer, Glenview, Ill.

"I didn't mind much when 'viral' came to mean an under-handed tactic by advertising companies to make their ads look like pop culture. However, now anything that becomes popular on YouTube is suddenly 'viral.' I just don't get it." Kevin Wood, Wallacetown, Ont.

"Every time I see a viral video on CNN or am asked to 'Let's go viral with this' in another lame e-mail forwarded message, it makes me sick." Lian Schmidt, Bandon, Ore.

EPIC
More than one nominator says the use of 'epic' has become an epic annoyance.

"Cecil B. DeMille movies are epic. Internet fallouts and opinions delivered in caps-lock are not. 'Epic fail,' 'epic win', 'epic (noun)' -- it doesn't matter; it needs to be banished until people recognize that echoing trite, hyperbolic Internet phrases in an effort to look witty or intelligent actually achieves the opposite." Kim U., Des Moines, Iowa.

"Anything that this word describes in popular over-usage is rarely ever 'epic' in the traditional sense of being heroic, majestic, or just plain awe-inspiring." Mel F., Dallas, Tex.

"Standards for using 'epic' are so low, even 'awesome' is embarrassed." Mike of Kettering, Ohio.

"I'm sure that when the history books are written or updated and stories have been passed through the generations, the epic powder on the slopes during your last ski trip or your participation in last night's epic flash mob will probably not be included. This may be the root of this epic problem, but it seems as if during the past two years, any idea that was not successful was considered an 'epic-fail.' This includes the PowerPoint presentation you tried to give during this morning's meeting, but couldn't because of technical problems. Also, the ice storm of 'epic proportions' that is blanketing the east coast this winter sure looks a lot like the storm that happened last winter." DV, Seattle, Wash.

FAIL
One nominator says, "what originally may have been a term for a stockbroker's default is now abused by today's youth as virtually any kind of 'failure.' Whether it is someone tripping, a car accident, a costumed character scaring the living daylights out a kid, or just a poor choice in fashion, these people drive me crazy thinking that anything that is a mistake is a 'fail.' They fail proper language!"

"Fail is not a noun. It is not an adjective. It is a verb. If this word is not banned, then this entire word banishment system is full of FAIL. (Now doesn't that just sound silly?)" Daniel of Carrollton, Ga.

"When FAILblog.org went up, it was a funny way to view videos of unfortunate people in unfortunate situations. The word fail is now used by people, very often just to tease others, when they 'FAIL.' Any time you screw up in life -- a trip up the stairs, a bump into a wall, or a Freudian slip, you get that word thrown in your face." Tyler Lynch, Washington, Iowa.

"It has taken over blogs, photo captions, 'status' comments. Anytime someone does something less than perfect, we have to read 'FAIL!' The word has failed us all." Aaron Yunker, Ishpeming, Mich.

WOW FACTOR
"This buzzword is served up with a heaping of cliché factor and a side order of irritation. But the lemmings from cable-TV cooking, whatever design and fashion shows keep dishing it out. I miss the old days when 'factor' was only on the math-and-science menu." Dan Muldoon, Omaha, Neb.

"Done-to-death phrase to point out something with a somewhat significantly appealing appearance." Ann Pepper, Knoxville, Tenn.

A-HA MOMENT
"All this means is a point at which you understand something or something becomes clearer. Why can't you just say that?" Audrey Mayo, Killeen, Tex.

BACK STORY
"This should be on the list of words that don't need to exist because a perfectly good word has been used for years. In this case, the word is 'history,' or, for those who must be weaned, 'story.'" Jeff Williams, Sherwood, Ariz.

"Another case of 'verbing' a noun and ending with a preposition that goes nowhere. Not only that, the phrase is insulting, especially when voiced by a female, who'd never think to say, 'Woman up!'" Aunt Shecky, East Greenbush, NY.

"Can a woman 'man-up,' or would she be expected to 'woman-up?'" Jay Leslie, Portland, Maine.

"Not just overused (a 2010 top word according to the Global Language Monitor) but bullying and sexist." Christopher K. Philippo, Glenmont, NY.

"We had to put up with 'lawyer up.' Now 'man up,' too? A chest-thumping cultural regression fit for frat boys stacking beer glasses." Craig Chalquist Ph.D., Walnut Creek, Calif.

REFUDIATE
"Adding this word to the English language simply because a part-time politician lacks a spell checker on her cell phone is an action that needs to be repudiated." Dale Humphreys, Muskegon, Mich.

Kuahmel Allah of Los Angeles, Calif. wants to banish what he called 'Sarah Palin-isms': "Let's 'refudiate' them on the double!"

MAMA GRIZZLIES
"Unless you are referring to a scientific study of Ursus arctos horribilis, this analogy of right-wing female politicians should rest in peace." Mark Carlson, Sault Ste. Marie, Mich.

THE AMERICAN PEOPLE
"These politicians in Congress say 'the American People' as part of what seems like every statement they make! I see that others have noticed it, too, as various websites abound, including an entry on Wikipedia." Paul M. Girouard, St. Louis, Mo.

"No one in Washington can pontificate for more than two sentences without using it. Beyond overuse, these people imply that 'the American people' want/expect/demand all the same things. They don't." Dick Hilker, Loveland, Colo.

"Aren't all Americans people? Every political speech refers to the 'American' people as if simply saying 'Americans' (or 'people') is not enough." Deb Faust, Sault Ste. Marie, Mich.

I'M JUST SAYIN'
"'A phrase used to diffuse any ill feelings caused by a preceded remark,' according to the Urban Dictionary. Do we really need a qualifier at the end of every sentence? People feel uncomfortable with a comment that was made and then 'just sayin'' comes rolling off the tongue? It really doesn't change what was said. I'm just sayin'." Becky of Sault Ste. Marie, Mich.

"And we would never have known if you hadn't told us." Bob Forrest, Tempe, Ariz.

"When a 24-hour news network had the misguided notion to brand this phrase as a commentary segment called, 'Just sayin', I thought I was going to wretch." Casey Conroy, Pleasant Hill, Calif.

FACEBOOK/GOOGLE as verbs
"Facebook is a great, addicting website. Google is a great search engine. However, their use as verbs causes some deep problems. As bad as they are, the trend can only get worse, i.e. 'I'm going to Twitter a few people, then Yahoo the movie listings and maybe Amazon a book or two." Jordan of Waterloo, Ont.

LIVE LIFE TO THE FULLEST
"It's an absurdity followed by a redundancy. First, things are full or they're not; there is no fullest. Second, 'live life' is redundant. Finally, the expression is nauseatingly overused. What's wrong with enjoying life fully or completely? The phrase makes me gag. I'm surprised it hasn't appeared on the list before." Sylvia Hall, Williamsport, Penn.

artwork and text from -LSSU-